Anger, apologies and a promise

I have work I really need to do. I somehow ended up signing up for NaNo again (I blame a certain friend- you know who you are :-p)  and I have 4 other posts that I’m currently struggling to finish. But this decided it needed to be written today.

I can’t figure out how to set this up properly so: 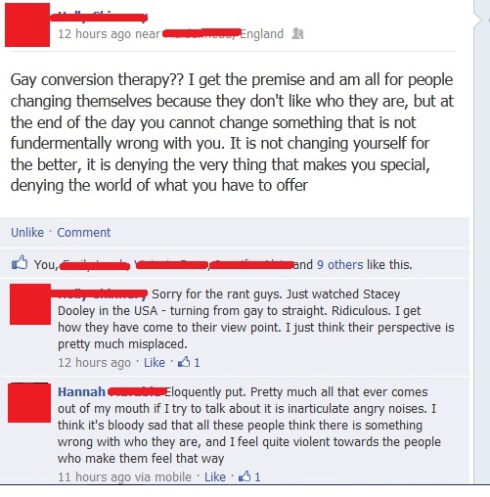 I am sad. Sad that not a week goes by without someone being attacked or beaten for being who they are. That corrective rape is so common in certain parts of the world there have been special taskforces set up. Sad that people are still so fearful or ashamed they turn to so-called doctors or religious leaders to take part in something that is empirically dangerous and harmful and doesn’t even seem to work.  Recent studies have shown that LGBT young people commit suicide at  around six times the rate of their peers, are at high risk of homelessness, and have a much higher rate of substance abuse. It currently seems to be the fashionable issue to talk about, but what happens when it’s not?

I am angry. I am angry at the religious leaders that preach hate and intolerance, that let people justify their bigotry behind pretty sounding words and the ever acceptable “religious reasons” . Powerful men and women who blame a group of innocent people for everything from the decline of honey bees to natural disasters and offer mysterious cures for something that cannot and need not be fixed

I am pissed off at the parents who “jokingly “ threaten their children with death if they dare do something as heinous as come out as gay. The people who in all seriousness hurt disown and throw out their children because they turned out differently to how they expected. I am furious at those who pass on their hate to those they are supposed to be raising to be decent human beings.

I hate the causal use of the word gay to mean something bad or wrong. I hate the hilarious jokes, even from those who thing they are being edgy or supportive or some shit like that. I am angry that straight is the default option, that someone’s sexuality is still headline news or necessary to mention at every possible opportunity. That stereotypes are so entrenched that it’s still a surprise when someone doesn’t look gay/bisexual/lesbian because they don’t wear the uniform, speak the language or know the fucking secret handshake.

Yes,  in case you haven’t noticed, I am angry. I am angrier at bigots, at society than it is probably healthier to be. But I am also very angry at myself.

With the power of hindsight I can see that I first had a crush on a girl when I was thirteen years old. But it took me the best part of five years to admit it to myself, and almost 3  after that years to actually say the words “I am bisexual” anywhere other than in my own head.

I was bullied on and off at school, and I wasn’t going to admit to being any more of a freak than people already thought I was.

My dad and several other family members are homophobic the same way  they are racist, casually and without true thought. My mum is Christian. So is my gran. I didn’t want to face what I was sure would be their anger and disappointment with me. I didn’t want to lose what few friends I did have.  I wasn’t going to make things any more awkward than I had to. Boys were still hot.

So I buried things down pretty deep and kept my “aesthetic appreciation” of women to myself. Embarrassingly, it wasn’t until I was at uni and I fell head over heels for one girl in particular that I actually began to take notice of the shit that I’d pushed down in the Not Really Thinking About This Ever box.

And through therapy and some useful medication for (mostly unrelated) depression, I’ve mostly come to terms with myself.

I may be socially anxious, terrible at using my words, prone to procrastination, and have a horribly destructive habit of lying under pressure, but I’m working on that.

Most days I have pride, and quite happily announce to anyone that that I only really want to see the third Batman film because of Ann Hathaway in a catsuit, or that I’m ready and willing to marry Jonnie Peacock if he asks me.  I’m lucky enough that my family and friends are supportive and life goes on.

But today? Today I feel angry. Angry and ashamed of the times I made like a fictional ostrich, the times I didn’t speak up.

I want to apologise. I want to apologise to the awesome girl at my school who was brave enough to tell someone else that she maybe was in to girls. Even though I never said anything, I’m sorry I stood by while they made jokes about you, while they whispered behind your back.

To the lovely guy whom everyone used to joke was gay. I’m sorry I gave in that one time and made a joke to fit in, as if men loving other men meant something was wrong with them.

To the person who said they could do with knowing that someone had been in the same situation, and I still said nothing I apologise. I can’t really articulate why, but our friendship was still so new- and it wasn’t something I had the words for yet. If you still want to talk, you know where I am.

If this is how I’m coming out to you I suppose I should apologise for being so damn earnest and foul mouthed about it, but I’m done.

Done with hiding. Done with being ashamed. Done with Not Saying Anything because it makes myself and others uncomfortable. I will always be sorry I didn’t speak up before, but for what little difference it makes, I will now.

One thought on “Anger, apologies and a promise”